Want to Fight Extremism and Help Moves toward Middle East Peace? A Deal with Iran Might Help. 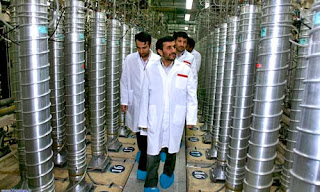 Photo: The Guardian - http://www.theguardian.com/world/2012/nov/04/iran-suspend-uranium-enrichment
One of the reasons I have been arguing for action on Syria is because Iran is watching. If we're not willing to stop Syria from using chemical weapons, so the argument goes, Iran will know full well that we are not going to bomb it to stop it from getting a nuclear weapon. Now that our weak commitment to enforcing norms against weapons of mass destruction has become clear, however, it may be time to look for the bright side. In this case, the bright side has to do with the other half of the deterrence equation: the promise.

Most people focus on the threat side of deterrence because deterrence is, roughly, using contingent threats to prevent an adversary from taking a particular undesirable action. The "contingent" part (we will attack only if you do x) is often swiftly forgotten, but deterrence cannot work without it. "You won't like what we'll do to you if you do x" also means "if you DON'T do x, everything will be fine." Similarly, a lot of time is spent worrying about the credibility of threats,but almost no thought is given to the credibility of promises NOT to attack. This is a huge oversight, because if I believe you'll attack me either way, I have a strong incentive to hit you first, or do whatever it was you didn't like, in order to be stronger and appear defiant in the face of your threats.
I suspect so little attention is given to the credibility of promises because of an assumption made by deterrers that they are the good guys and are peace-loving, so of course our promise to be nice is believable, unlike conciliatory promises made by the other side, which, being the enemy, is not to be trusted. I'm not arguing that we should trust Iran. Everything about its nuclear program screams "weapons," despite its assertions to the contrary. What I AM saying is that we should not assume Iran ought to be able to trust us and that any concerns it claims to have are just posturing and nonsense.
Iran has at least two reasons to doubt the US. One is that we have successfully toppled its government once before (after a period of constant meddling my Russia and Britain) in the 1950s. The other is that the US has made no secret of its wish to see regime change in Iran ever since. The past two centuries of Iran's history have served as a lesson never to trust big foreign powers. What may seem to Americans like paranoia or fake worry looks to Iranians like sensible concerns about preventing subversion by foreigners.
The fact that the US obviously does not want to get drawn any further into Middle East conflicts is thus a cause for Iran to relax: The US attempting to topple the Iranian regime seems quite unlikely at the moment. The question is now whether Iran wants the bomb to have greater power over its neighbors (in which case a more conciliatory US stance is unlikely to help) or because it mainly fears the US and its allies (some also in the region), which could be helped by a more peaceful-looking United States.
That question is basically moot, however, because I don't see the US attacking Iran any time soon. The question thus becomes: Now that we have limited our options, what is the path to the best possible outcome? Even if Iran is seeking regional hegemony, as many in Israel believe, getting a bomb may not be the best way to get there, especially if this causes other regional powers like Saudi Arabia to go nuclear as well. The current sanctions on Iran are very painful. They would continue and intensify if Iran got the bomb. This weakens Iran and makes its people unhappy, increasing risks for the regime. If Iran feels safe from US invasion and attacks by Israel, cooperation on several levels could be possible and be a way for Iran to grow stronger. Al Qaeda is one of Iran's biggest enemies, just as it is to the United States. The same goes for other Sunni extremist groups. Given the apparent recent resurgence in Al Qaeda's strength, cooperation with Iran on countering those groups could be useful. At the same time, Shia groups like Hezbollah defer heavily to Iran's leadership. Iran is thus a central player in Middle East politics involving terror groups and other non-state actors and is THE power when it comes to Shia Islam.
Iran's pride would need to be protected in any deal. One possibility would be to leave Iran "stalled" at near break-out capacity for creating a bomb (broadly where it is today). Iran has continually insisted it does not wish to build a bomb, so this would not have to seem a climb-down and would save face. At the same time, Iran would not have a bomb and could perhaps slowly climb down from having one through increased cooperation on a civilian program. This would meet US goals and save US face and credibility. Reducing tension between the West and Iran could also help in the Israeli-Palestinian crisis, as Hezbollah defers heavily to Iran and Hamas also listens to it, covering two of Israel's most difficult borders. A removal of tension may make Israel feel secure enough to negotiate.
It's not that far-fetched. Iran doesn't seem that sure on whether it wants to cross that final threshold and obtain a bomb. There's a decent chance it won't build one. The US and its allies should of course stick to the sanctions until concrete progress is made and make clear their commitment to protecting their allies in the region, including against nuclear threats. But if the US seizes such an opportunity, further cooperation would be more probable than at any time since 1979.
Labels: deterrence Iran Israel Middle East nuclear non-proliferation nuclear weapons U.S. foreign policy United States