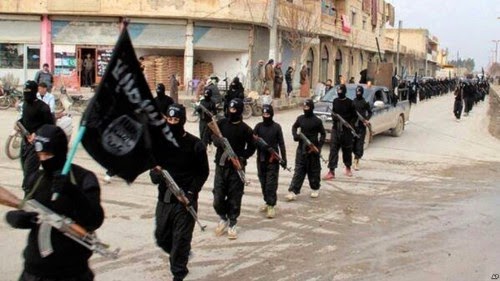 Photo: Creative Commons via Voice of America
Islamic State (IS, aka ISIL, aka ISIS) is a brutal, deadly organization operating in Syria and Iraq. It is intensifying the refugee crisis in the region, which in itself threatens to destabilize countries like Lebanon and Jordan, which the group also wishes to conquer. This instability and bloodshed alone would be reason enough for the US to take action, but America also has a certain responsibility to help Iraq, as the political situation there that allowed IS to gain a foothold in the country has come about partly through US (in)action. The fact that the Iraqis requested US help leaves little question of the legitimacy of action against Islamic State within Iraq. Conundrums abound, however, and it is easy to see why US President Barack Obama has been so hesitant to get involved.

The US is now involved, however, with the stated aim of leading a broad coalition to "roll back this terrorist threat" and to "degrade and ultimately destroy ISIL through a comprehensive and sustained counterterrorism strategy." Obama also vowed to "hunt down terrorists who threaten our country wherever they are," explicitly allowing airstrikes in Syria as well as Iraq. He announced that 475 additional US troops would be sent to Iraq to advise and train Iraqi forces. The air campaign in Iraq could be expanded and Syrian rebels would also be trained and funded to attack IS.

These actions may be effective in "rolling back" IS--i.e. pushing it back out of Iraq--and "degrading" it, but they are unlikely to "destroy" it anytime soon. Furthermore, even if they did the latter, there is no guarantee that another group would not take its place. Militant groups like IS require support from the populations in which they operate. The flip-side of that coin, however, is that it is nearly impossible to eliminate them as long as they have such support. Furthermore, that support needn't be from anything like a majority of the population as long as there are enough people to hide, supply, and fight for the group. Support for such groups comes for political reasons (such as anger at repression or at a lack of power for a given group). To "destroy" IS, then, requires eliminating as much support for it as possible. Eliminating support for it requires addressing the political issues that have led to that support--in other words: political solutions are needed for political problems. These do not really seem to be part of the "comprehensive and sustained counterterrorism strategy" Obama announced.

Retired British General Rupert Smith points out that armies can be used to assist governments or populations in difficulties, or in order to contain a threat, "without knowing the desired political outcome" or necessarily having a strategy for how the situation ends.1 Even without a political solution, then, the US would still stand some chance at "rolling back" and "degrading" IS. As pointed out, however, "destroying" it would require a political resolution. A more inclusive government and security service within Iraq may be able to resolve the political issues that fostered support for IS there (if indeed these changes really come about). The situation in Syria, however, is much worse. Smith notes that "destroy" missions that lacked political strategies have tended to slide into being "containment" missions instead. Such a mission may be able to stabilize Iraq and secure its border to Syria while the war there rages on and IS continues to operate and occasionally threaten neighboring countries and even its enemies abroad, like the US. This doesn't sound like the aim Obama set forth.

It is hard to envision destroying IS as long as the civil war in Syria continues. For America to achieve its final objective, then, the war must end. At the risk of gross understatement, this is highly problematic because there are basically only two ways the war could end, and neither is particularly appetizing. The first way is that one group or coalition could win the war and impose its will on the rest of the country. Supporting such an iron-fisted imposition of "peace" would be unpalatable to a democratic country like the United States. The second way the war could end would be with a democratic system of checks and balances that protects minorities and provides assurances to the country's various interest groups. This would require broad support within Syrian society and, crucially, trust among the various groups in that society in the fairness and stability of a democratic government. The civil war and a history of authoritarian rule, however, mean that trust is in seriously short supply in Syria. Creating the conditions for such trust, including a government and institutions worthy of it, would be an enormous undertaking.

The easiest way for the US to end the war in Syria would be to throw all its support behind the Assad regime. It could save face by finding a way to work with Russia and Iran to force Assad out while keeping the rest of his regime in place. After the atrocities the regime has committed, which outstrip those of IS in scale, this would be hard to stomach and would strain the US's relations with Sunni allies like Saudi Arabia and Turkey to the breaking point.

The harder way would be to support a pro-democracy coalition within Syria and give it all the backing it needed to win. This is sort of the current plan, but there is plenty of room to question how "democratic" the US-backed rebels are. The US generally speaks of "moderate" rebels, whatever that means, but conspicuously leaves out any reference to their democratic intentions if they were to take power. If these rebels beat both IS and the Assad regime to take control of Syria, they would be coming to power with numerous backers, many of whom, such as those from the Gulf states, who would not be particularly interested in supporting democracy. In order to influence things in that direction, the rebels would need to be supported by, and rely most heavily on, the West. This would almost certainly mean US troops in Syria and a lengthy, large-scale operation to stabilize the country enough to allow trust to be rebuilt and give all the groups within the Syrian population a stake in the success of a new system. Given the constraints on the US, from its budget tightening to the overwhelming opposition of its population to greater involvement in the region, coupled with the US's poor record in state-building and democracy promotion at gunpoint, this option is inconceivable and success would be far from assured if it were.

In the end, then, Obama's goal to "degrade and ultimately destroy" IS should probably be seen as having a greater emphasis on the "degrade" part. The "ultimately" portion, along with the difficulties of "destroying" IS without extensive involvement in Syria or making unpalatable decisions, suggests this is more of a wish than something that is actually planned at any time in the near future.  As such, the current operation is likely to end up being one of containment, which will be open-ended, only being resolved when someone wins the Syrian civil war. If American-backed rebels win it, tough decisions will still lie ahead. If they don't, even tougher ones may, along with a lot of recriminations. Even the cautious option Obama seems to have selected is fraught with peril and tens of thousands of lives will still likely be lost. Doing something may be better than doing nothing, but it is still not very good.
1. Smith, Rupert. The Utility of Force: The Art of War in the Modern World. Kindle Edition. London: Penguin, 2012, Chapter 7.
Labels: Barack Obama Bashar al-Assad Iran Iraq Islamic State Syria terrorism United States