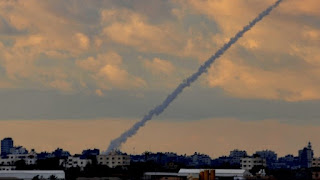 Salafists allied with Islamic State have claimed a recent Grad rocket launch on the Israeli city of Ashdod. Israel has responded by attacking several sites in Gaza belonging to Hamas, which often clashes with Salafists. Why?

Overnight last night, the Israeli Air Force struck several Hamas sites in the Gaza Strip in response to rocket fire from the Strip, claimed by a Salafist group affiliated with Islamic State, according to a report by the Israeli daily Haaretz. Grad rockets are a longer-range type of rocket more often associated with Islamic Jihad, a rival militant group closer to Hamas. Yesterday's launch marked the first time that a rocket was fired at Ashdod, about 25-30km from the Strip, since the war last summer. The rocket was intercepted by Israel's Iron Dome missile defense system and caused no damage or injuries.

If the rocket was launched by a Salafist rival to Hamas and potentially supplied (or perhaps even fired by) another non-Hamas group, why did Israel respond by attacking Hamas sites? Put simply, Israel holds Hamas, as the main authority in the Gaza Strip, responsible for what comes out of the Strip. It's an approach sometimes known as "indirect deterrence". Deterrence functions as follows: A threatens to strike B if B strikes A. If B then decides not to strike A as a result of A's threat of counterattack, then B has been deterred. "Indirect" deterrence is a bit different. In this case, A threatens to strike B if B or C attack A. The intention is to compel B to rein in C.

This method often works, which is why Israel has relied on it for decades, particularly when it has difficulty targeting an aggressor directly. Israel knows Hamas is currently under a great deal of pressure as conditions in Gaza worsen due to Egypt's destruction of more of the smuggling tunnels Hamas previously relied on for revenue and Gaza has long relied upon for supplies. Gazan electricity supplies, never reliable, have gotten even worse of late, with the same Haaretz article reporting that many Gazans are without power for 15 hours per day. The water supply is also dangerously low and unsanitary.

Hitting Hamas militarily in addition to the economic and political pressures it faces in the Strip is therefore risky. When backed into a corner, Hamas has before lashed out violently, which generally also raises its approval ratings among Gazans. An additional risk is potentially much worse: If Hamas becomes too weak, it could lose control of Gaza. Who or what would take its place is unclear. If chaos ensued, Israel might find itself compelled to recapture the Gaza Strip, something it is loath to do. The fact that Israel has decided to target Hamas anyway suggests either that it believes Hamas is strong enough to do more to curb the Salafists' capabilities or that it is struggling to target the Salafists directly.

Retaliations can help to maintain a given period of relative calm, but there is also a danger that they could accumulate, leading to another round of escalating violence. Just a bit more than one year after the last bloody war, another round of escalation would be an ominous sign. If Gaza wars continue to occur in shorter intervals, the day when Israel might have to reconquer Gaza will come closer.
Labels: Ashdod deterrence Gaza Strip Grad rocket Hamas IAF IDF Iron Dome Islamic State Israel