All Hail Assad—Just Don't Admit It 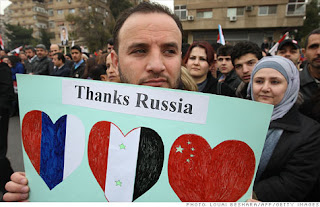 America's strategy for Syria seems to be to let Russia get on with it and see what happens. If Russia successfully re-installs Assad, America can blame Russia for propping up a murderous dictator—as it sits back with a sigh of relief. It's a win-win, except for the norms against the use of chemical weapons, the indiscriminate killing of one's own civilians, and the emerging norm of the responsibility to protect. It may also be a nail in the coffin of Pax Americana.


When Syrians began protesting against the Assad regime in 2011, America spoke out in support of their right to protest. The American Ambassador to Syria, Robert Ford, drove to protests in Sunni areas to show his support. His car was showered with flowers. As Syria expert Murhaf Jouejati told PBS's Frontline, the Syrian uprising began as a secular one, with crowds shouting "wahed, wahed, wahed" ("one, one, one"). This was not to last, however. As Assad began to strike back violently, the once peaceful protests became violent as well and Jihadist elements grew in strength and number. Ambassador Ford urged US President Barack Obama to back the secular and moderately Islamist portions of the Syrian opposition. There were also calls to establish safe havens within Syria protected by no-fly zones to allow Syrian refugees to flee there to be cared for by aid agencies and to allow the opposition a place to organize and re-group. Obama demurred.

Not wishing to get involved in yet another Middle Eastern conflict, Obama instead set "red lines" against the use of chemical weapons. He hoped this would deter Assad from using them and that America could thus at least enforce the international norm against using chemical weapons. Assad called his bluff in 2013 and used them in several attacks. France, the UK, and the US all said they would act, but the former two were waiting for the US. British Prime Minister David Cameron asked for parliamentary approval for a strike against Assad. He lost. Then Obama blinked. He asked Congress for authorization, though he also didn't need it legally. Congress voted no, too. Russia then stepped in and helped broker a deal for Syria to get rid of its chemical weapons instead. America accepted the deal and Assad stayed in power. "Chemical weapons may not be used and their use will be punished" turned into "OK, but REALLY don't use them next time." Other despots who might consider using chemical weapons will have taken notice.

Since then, things have gone from bad to worse. The "Islamic State" (IS) controls vast areas of Syria and neighboring Iraq, even as Syrian government forces have been losing ground. Worse still, the opposition groups the West might have backed have been squeezed between IS and Assad—and are nearly a spent force. Few among them have any considerable strength left, except perhaps for Jabhat al-Nusra, a Jihadist group allied with al-Qaeda. A situation with only challenging, risky options has turned into one with only awful, very risky options. What has been the response? Approve more air strikes against IS, now including within Syria, and otherwise wring our hands and hope for a savior.

And now that savior may have arrived, but it's not the savior anyone in the West wanted. It's Vladimir Putin, riding to the rescue of his ally, Bashar al-Assad. Russia has sent fighter jets to Latakia and begun bombing raids on anti-Assad forces. The response in the West was initially muted, until it turned out—surprise surprise—that the forces Russia was targeting were not, in fact, those of IS, but those of some of the few anti-Assad rebels left not belonging to IS or al-Nusra. This is, in fact, unsurprising, because those rebels are closer to crucial Assad-controlled areas than much of the IS forces and so, in the short term, pose a greater risk to Assad than IS does. The US has condemned the raids, but on past form, that is likely to be the extent of the response.

Such a bargain—tacitly allowing aid to Assad so he re-gains the upper hand and squashes IS and al-Nusra—has long been talked about. The nuclear deal with Iran, a supporter of Assad and his ally Hezbollah, was seen as paving the way toward such, at least tacit, cooperation. But as many in the Syrian opposition have pointed out, it is Assad, not IS, who has killed the most people since the conflict began in Syria. Most of the refugees arriving in Europe are fleeing attacks by Assad, not IS. The West cannot support a regime responsible for killing potentially hundreds of thousands (exact figures are somewhat hard to come by, but estimates are that Assad is responsible for the majority of the estimated 250,000 killed so far). So we condemn the support and do nothing about it instead. Clean hands, no lost treasure, good nights' sleep. We didn't stop it, but surely those who started it are more to blame?

This has repercussions beyond Syria and Iraq and beyond the refugees crisis unfolding in Europe. It even has repercussions beyond the continued radicalization that violence is likely to bring to a once stable and moderate country and thus beyond the rise in terror attacks that could very well result. At risk is the entire Pax America (American Peace) that has reigned since 1945. The relative decline in America's power is inevitable and will not necessarily lead to global war. But it could if we are not careful and smart. Japan's recent reinterpretation of its pacifist constitution is at once a comforting sign, because it will strengthen the capabilities of the Japanese-American alliance, and an ominous one, as it suggests the Japanese no longer feel confident in America's ability to protect them, and even itself, in the Western Pacific and therefore maintain order in East Asia. Just one example of the importance of this is that Japan has the capacity to build nuclear weapons quickly, but it never has because it has not felt the need. With the enormous might of China right next to it and the tense relations between them, would that remain the case if the Japanese felt America could not, or would not, protect them?

The same is true for American friends, allies, and even enemies, around the world, including in the Middle East. American power underwrites the current system. It reduces arms races and hawkish rhetoric by promising to assist those who need American help and punish those who upset the order or threaten others. Throughout the world, states have three choices: Protect themselves, seek help from a regional power, or seek an alliance with America. If the American option is unavailable, states will be stuck protecting themselves or seeking regional alliances. Where weak states fear the regional power, there will be problems and there is great potential for violence and instability, which would effect the entire world, not least its economy, in myriad ways. America does indeed have a dog in this fight. It needs to manage its relative decline carefully. So far, it is doing a terrible job. The fact that no great wars have occurred in 70 years must not be allowed to lull the world into a false sense of security. The Pax Americana will not last forever, but we can influence how it ends.
Labels: America Bashar al-Assad foreign policy Islamic State Middle East Pax Americana realism refugee crisis refugees Russia Syria U.S. foreign policy US foreign policy Vladimir Putin world order